The BlueWorx application, BlueWorx Admin Application and BlueWorx Inspection Viewer have all been translated from English into a number of languages/. This article explains how this works.

The following languages are available

Prior to release SP5 the translations were for the BlueWorx applications only and do not include SAP configuration and master data values. As of SP5 BlueWorx now includes the translation of SAP Config and Master Data and BlueWorx Config.

What data is translated?

Translation of SAP Master Data is delivered across the application, including the following:

While the Admin Maps sub-application is translated the content you maintain for Maps, Layers, etc is not. This is because of the complexity with dealing with map data in multiple languages. If you have different language requirements then you can maintain duplicate entries, in all areas, for map services, layers, etc in your required language/s, include these in Map Profiles, and assign to users in their BlueWorx profile/s.

For some elements, you need to have SAP language packs installed in order to get translated values. Mainly this related to:

Our development language is English. That means that the styling of the application is performed using English length words. Our observation is that English, as compared with many of the other languages we support, is relatively compact in terms of the number of characters used. As a consequence some forms and list may have title over runs due to increased texts lengths.

There are some language related events in SAP whose maintenance does not trigger SAP change events. Examples include but are not limited to things like Order Long Text, Characteristic allowed values. In these cases the translations but not come to BlueWorx without master data refresh in SAP.

We've done our best but can't guarantee it's all correct!

We engaged professional translators to for the majority of our translations. To date we have translated over 3500 unique words and phrases related to over 73,000 application fields and over 5,000 technical elements. As we add new controls we maintain new values but may miss some depending on the release sequence or get the translation wrong. If you have suggested corrections that you'd like to see driven back into the BlueWorx product then please raise a support call via this site. Otherwise you can correct your version on each release import. 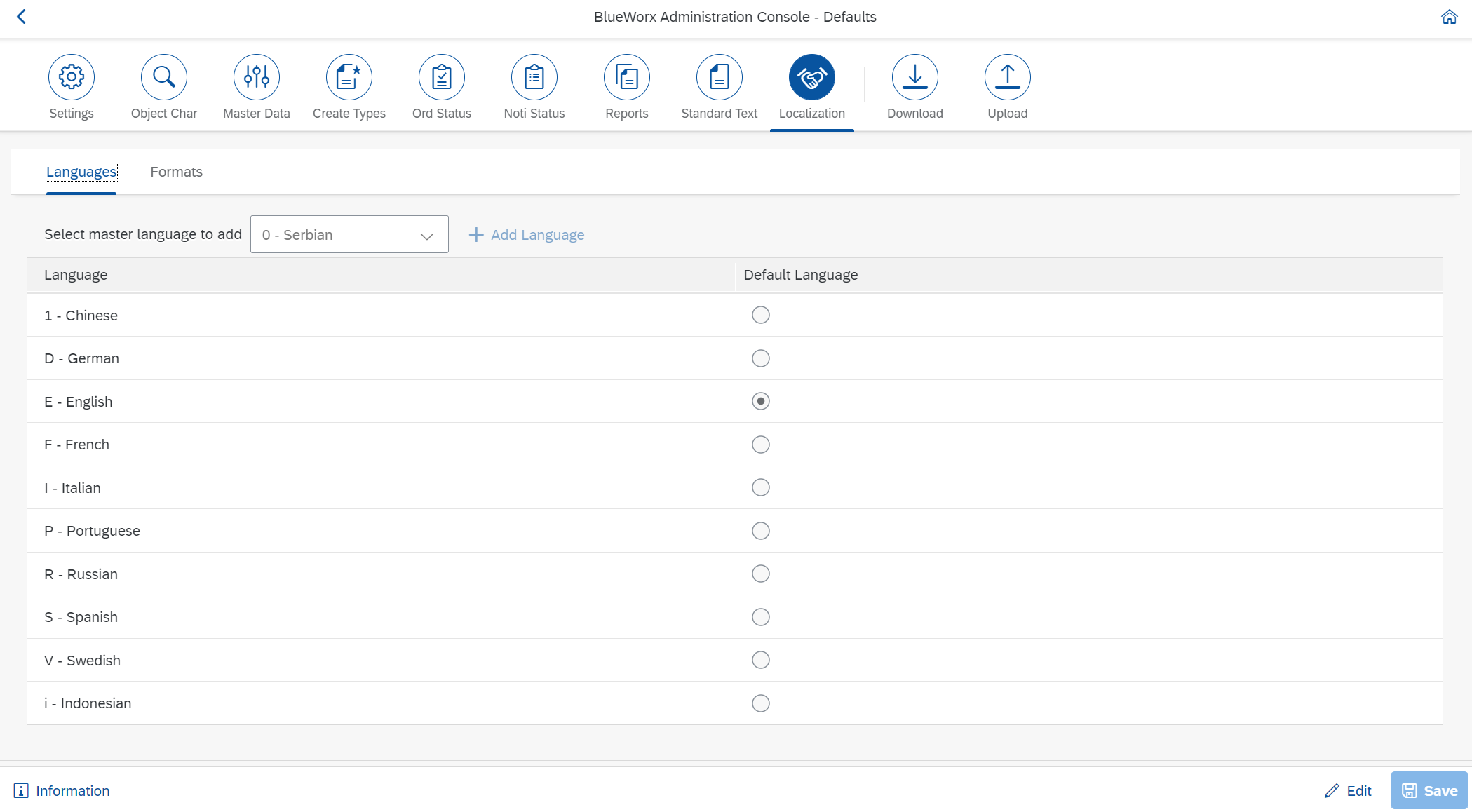 Add the languages you intend to use, marking one as your default language. The chosen default language necessarily must be installed in the SAP system as a language pack. Technically you don't need to have the SAP language packs installed to use it as a non-default language however, as previously described, the SAP configuration data, as some master data, requires these in order to maintain the data.

Other admin options, base upon these Master Language value settings are then available. These are documented separately in their respective area.

BlueWorx Administration screen elements are maintained in selected languages. As of SP5 there is the ability to maintain BlueWorx configuration and Inspection values in other languages. However configuration values for settings are maintained in the assigned Default language. So if the Default language is English and you logon to the Admin applications in Spanish you will see the field elements in Spanish but the main values for things like Status' in English. You can then maintain the translations in the other configured languages. 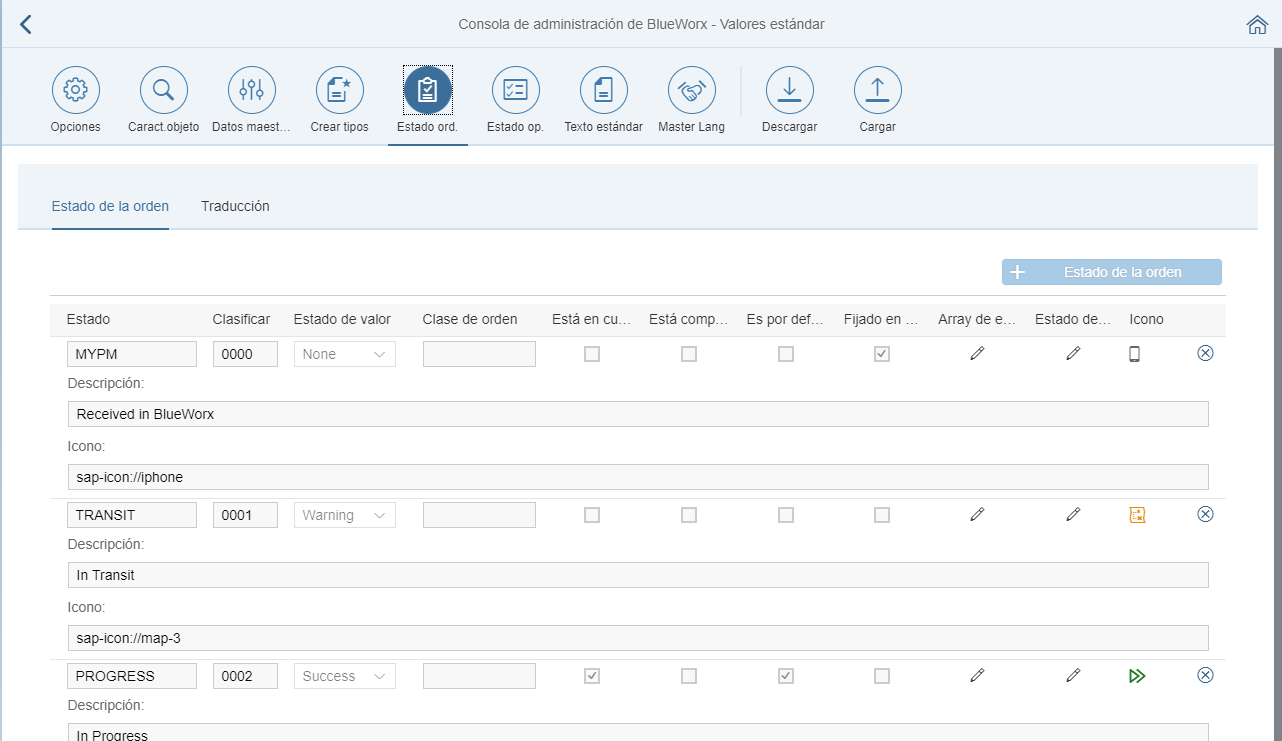 There are a variety of ways in which to dictate the language. 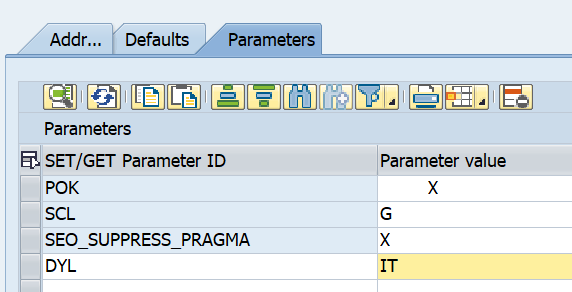 In this example the users language is being set to Italian.

If you have maintained the setting for the web application launchpad in Neptune Admin, then you can select the logon language on application login. If you don't allow this setting this it uses the SAP PID value maintained for the user and as discussed above.

Add the logon language to the browser string - i.e: https://yoursystem/neptune/webapp/?launchpad=DESKTOP_MENU&sap-client=100&sap-language=DE for German.

Note for Testers: The browser works using cookies which means that if you open multiple sessions, using different language parameters, then the cookie will be set to the last logon and interchanges back to SAP will use that language and not the URL display language. This is standard SAP/ browser behavior.

If you're using multiple languages then consider maintaining translations when you set up your Neptune Launchpad.

We have used the standard Neptune Application Designer functionality to support the BlueWorx, BlueWorx Admin and BlueWorx Inspection viewer app translations. This is available via the Neptune Designer Translation tab. Change must be done on the core BlueWorx application for Zag supplied content or in your extension application for customer content.

This is the designer screen in the older Neptune releases. Entries must be manually maintained although there is the ability to export to xls, maintain and then 'cut and paste' back into the designer.

This is the designer screen of later Neptune releases. It has the ability to export and import translations. Zag will provide translation files for import using this functionality. 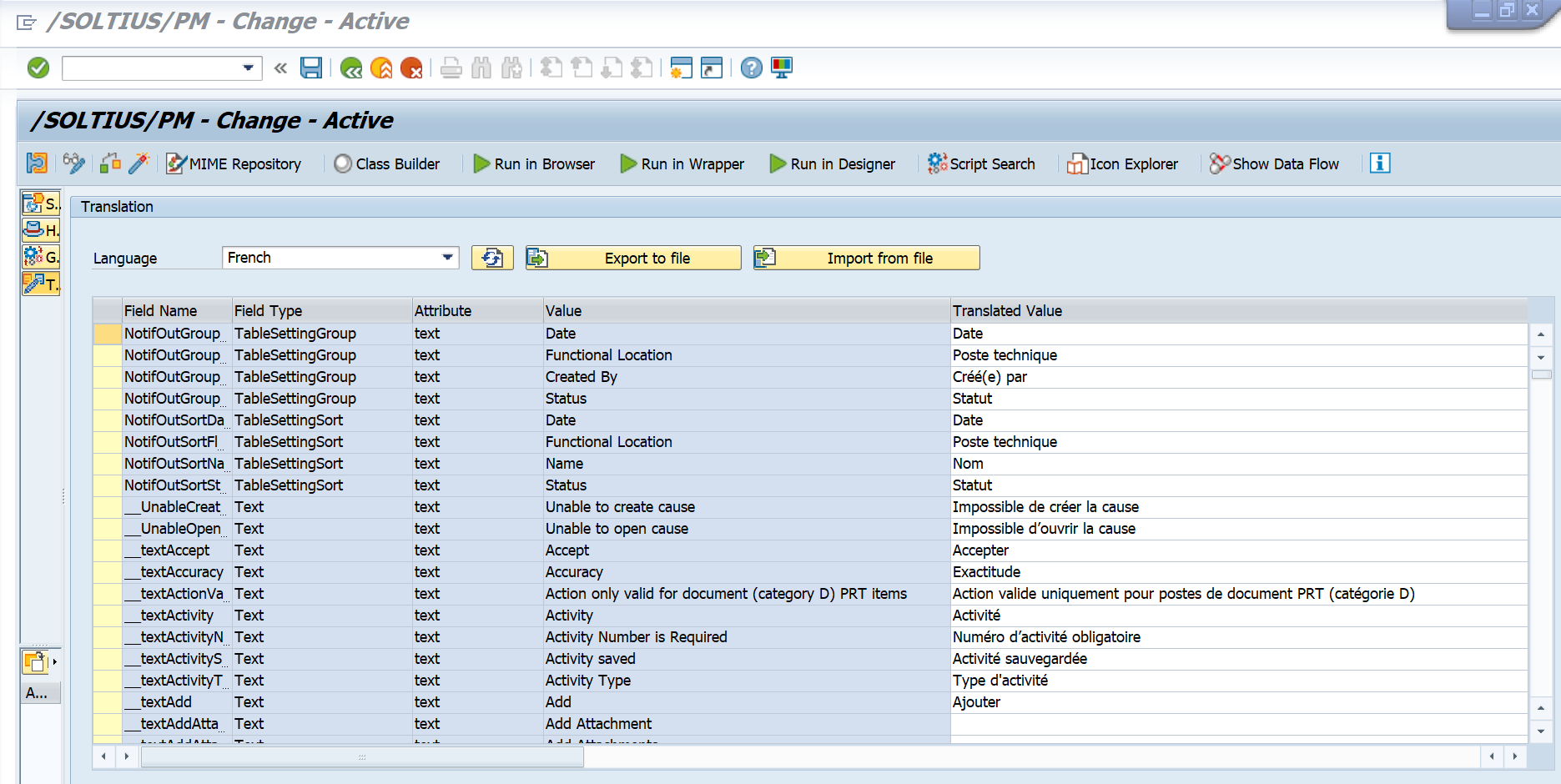